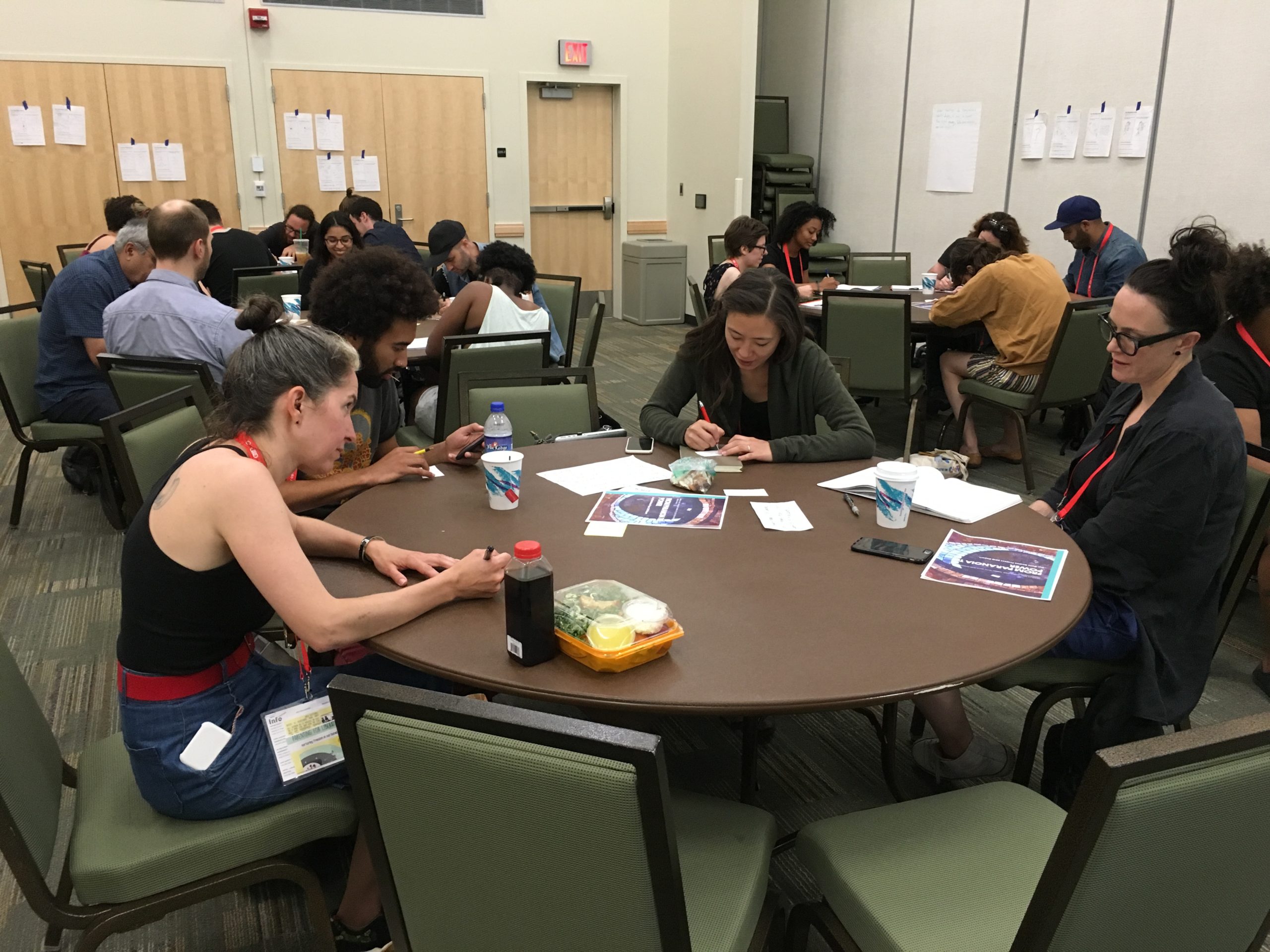 Tamika Lewis speaking during the What’s In Your Wallet Session, AMC 2017

“What’s in Your Wallet” encouraged participants to think about how their data bodies interact with digital surveillance and data collection as they move through space and encounter different institutions. Using an activity developed by Detroit-based team member Tawana Petty, Seeta Peña Gangadharan and Charlotte-based Tamika Lewis invited participants to classify the different kinds of cards in their wallets by the type of information each card collects or requires, such as biometric, financial, and location data. Reflecting on her data body, one participant said that the only card remaining in her wallet was the hole-punched loyalty card for her local Banh-mi restaurant. Participants constructing a data trail during the Power Not Paranoia Session, AMC 2017

Building on “What’s In Your Wallet,” “Power Not Paranoia” shared insights and lessons from our work in Charlotte, NC; Detroit, MI; and Los Angeles, CA. Snippets of life stories shared from ODB research participants served as conversation starters to get people in the room reflecting on their own experiences. A poem produced during the Power Not Paranoia Session, AMC 2017

The session ended with small groups using different ways to challenge anxieties, fears, frustrations, and anger with data-driven systems. From strategizing and sharing resources (like AMC’s Get Ready, Stay Ready zine) to using the power of the pen and movement to express alternatives to systems of technological control, participants used a variety of mediums to rewrite their own stories and redefine their own data bodies.

Los Angeles team member Mariella Saba reflected on the impact of the various facilitation techniques used by ODB during the workshops. “We’re facilitating a critical link in this bigger conversation about surveillance. We don’t often talk about how digital and non-digital surveillance impacts our mental health and our behavior. Participants were able to reclaim their bodies and embody power in community.”

“It was very grounding,” agreed Charlotte team member Tamika Lewis. “We used poetry and spoken word, embodiment and movement, political strategy, and other creative ways to talk about data collection and how it impacts people. Our popular education model was phenomenal – Participants were ecstatic about being part of a process that really engaged them.”

Turnout of nearly 100 people between the two workshops signalled the importance of surveillance and strategies for self-defense. “It was great to be able to bring something a little different from other sessions talking about data and security,” said Detroit team member Tawana Petty.

And the excitement will continue to spread. Teachers who attended asked to bring workshop materials into the classroom. A librarian requested ODB handouts to use in community data literacy classes. One of the best things about the experience, said Tamika Lewis, was that “people were grabbing our worksheets, because they felt like they could  go back to their communities and do this work right away.”

The ODB team was thrilled to be in Detroit, a city of extraordinary resilience and energy. Tawana Petty noted that, “I’m excited to see that this work is part of a larger picture. Detroit is used to having a microscope on it. Knowing that this is work that is being taken seriously, that we have instant, contemporaneous allies in three cities? That’s tremendous.”