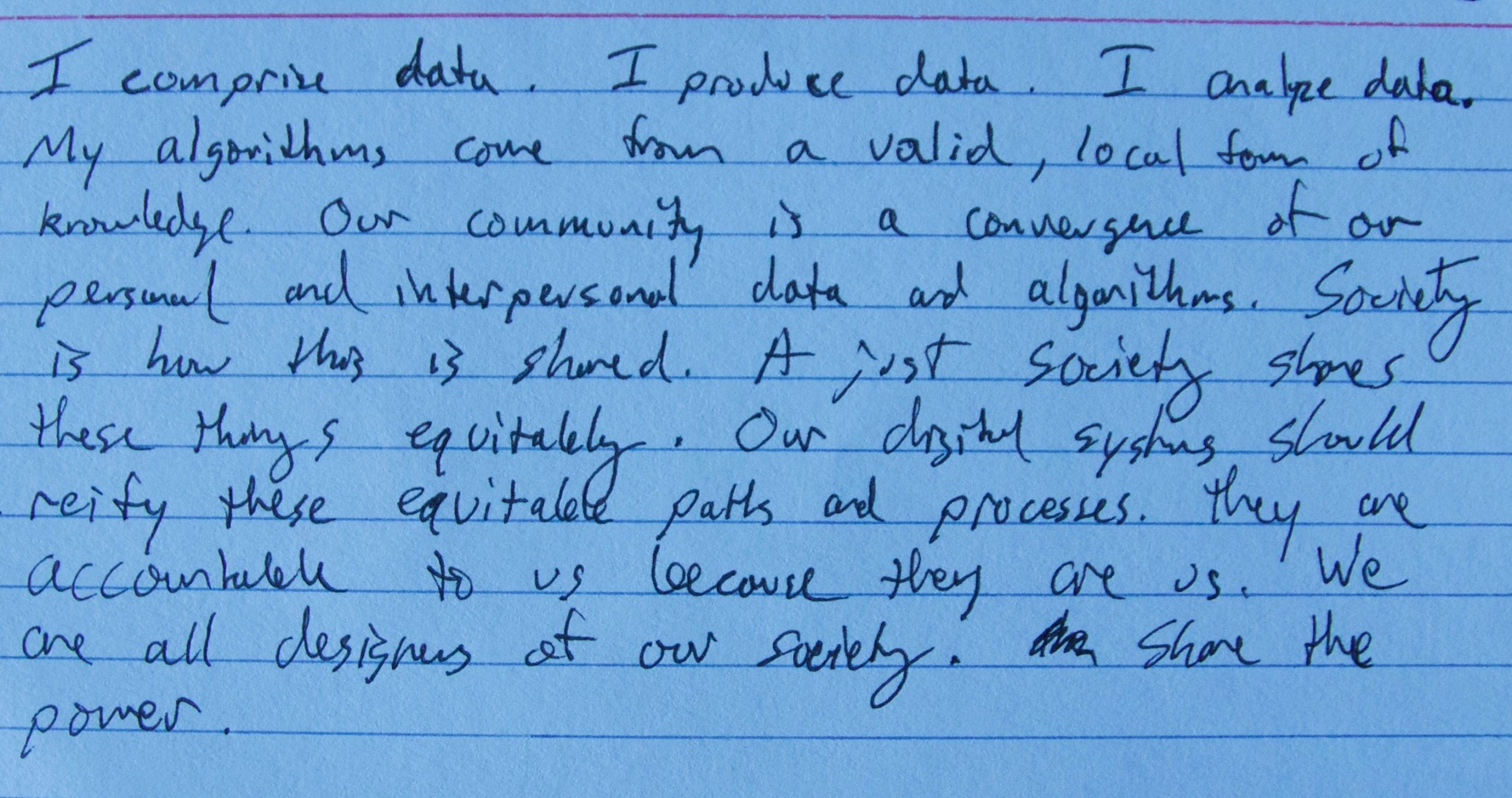 Power Not Paranoia: An Oral History

In November and December 2018, Seeta Peña Gangadharan, Kim M Reynolds, and Mariella Saba, ODB Project team members, reflected on Power Not Paranoia, a framework based in the idea of collective strength against the surveillance state. The framework was conceived through conversations and in the work of the Stop LAPD Spying Coalition. Organizers around the U.S. now use this language in their anti-surveillance and data justice work. This transcribed conversation details how this term germinated from the Coalition’s involvement in ODB.

Kim: What is the Power Not Paranoia framework?

Mariella: The phrase “Power Not Paranoia” comes from our experiences in the work when we created the Coalition. When starting the Coalition, we had the opportunity to open conversations about surveillance, and just about the reality of being watched by the state intentionally to cause harm whether for arrest, incarceration, family separation, displacement or murder. As we opened these conversations, we learned more about the technologies and the programs, including the first one issue the Coalition addressed, that being Special Order 11. Surveillance in its many forms can generate paranoia. Knowing a lot about how we are being watched can create a level of concern, worry, and fear, because all of these types of programs are secretive and invasive and meant to harm and… impact our mental health. Many of these attacks on the community often generate isolation too. And that’s why bringing people together to create a space to indeed name that “This is real, what you’re experiencing is real, and your experience is your truth, and also look at all these programs that are behind your experiences. So it’s not that you’re being paranoid. It’s that this is real. This is really an attack. And you’re not alone in this. So when we are organizing to change this together, it creates power in community. As a coalition, our work and intention is to transform that paranoia into power, and to build community power.

S: What is your first active memory of presenting that phrase?

M: One of the memories me and Hamid remember is later in 2016, after Trump was elected, we used it when we convened folks in what we called, “Grassroots Community Defense.” We just called onto different movement organizers to prepare for the attacks that were going to come down. And we offered “Power Not Paranoia” as a phrase to encourage our community building and power building. It also became a vivid memory because a participant raised concern about the word choice of paranoia, and it allowed for us to have a discussion on it, so we could better explain what we meant by that. We were acknowledging that the violence we live through does impact our mental health and that’s exactly why we were moving with that phrase, because we are experiencing the impacts of a culture of fear and want to transform the impact. So it’s not to disrespect the lived experiences of paranoia. So yeah, that’s my most vivid memory because of the dialogue that we engaged in at that meeting and carried the phrase beyond that moment. S: What is the timeline of Power Not Paranoia framework? When and how was it conceived?

Mariella: I was hired at the Stop LAPD Spying Coalition in November of 2015 for start of 2016. I was participating in monthly meetings with the Civil and Human Rights Committee and the LA CAN (Los Angeles Community Action Network) staff meetings. Before We Were ODB: Talking about Data and Data Justice (Los Angeles, 2016)

S: Would it be correct to say that in January [2016], you were already attending the [LA CAN] staff meetings, and then you started joining the Civil and Human Rights Committee?

M: Yes. From there two other meeting spaces were generated. One was a space dedicated just to Skid Row residents and LA CAN community… to start thinking about Our Data Bodies Project. And we didn’t have the name ODB yet.

S: Yes! We didn’t have a name until June!

M: And from those very focused spaces where it was mostly LA CAN membership/Skid Row residents came a monthly meeting space with Stop LAPD Spying Coalition…. I think the first one was in April.

M: Yes, and we started it every first Monday of the month. Then we realigned it to be the first Tuesday of every month as the Coalition was structuring to have a meeting every Tuesday for different campaigns. And we’ve kept that rhythm since then. Every first Tuesday of the month, there’s an ODB meeting. And it’s hosted at LA CAN so it’s accessible for the local Skid Row community to continue to be there. But it also has a wider reach through the Coalition across LA to join us. And after I started doing those monthly ones, I stopped hosting the smaller, Skid Row-focused ones. They blended into this monthly space instead. But a lot of the work was generated by this really focused group, and that was every two weeks that we were meeting.

S: So this is around April or May?

M: The monthly one’s started in April, and early ones started back in March. S: At what point did Ken Montenegro start? Was he a part of those meetings?

M: No. He was part of the Coalition in the process of co-founding and coordinating early on, and he continued to support the work with security trainings and more.

S: Were some of those security trainings part of the monthly meetings?

M: Not the ODB monthly meetings.

S: The reason why I mention Ken is our [ODB] Interim Report [includes a] link to his “Power Not Paranoia” skill share, which is on Github, dated May 2016.

M: Yeah, so, in May 2016, we were already using it. I remember naming Power not Paranoia with Hamid. I remember being in the office and having our usual conversations and debriefing work, and that phrase coming up. It was in part analysis. But it just popped up… like a summary of what I acknowledged was happening in our work. From working more closely one-on-one and in groups where people have been highly surveilled or stalked, the impact on people’s mental health, and then their engagement with their power in trying to reclaim their health and their lives was clear. [Stop LAPD Coalition’s work] was already ODB without the name… I’ve always said it [ODB] was a natural next step for the Coalition, continuously deepening our understanding of the police state and mapping it throughout systems, while always grounding the work in our lived experiences. That’s also why these meetings stayed grounded in Skid Row.

S: So by June, this framework is already taking shape because when we were in Charlotte, you already started presenting on it. By the time I visited you in August, the phrase was in full force. When we did the workshop together, you presented that as a point. We got there with Power Not Paranoia.

M: Yes, so the phrase came out of the work early on in March, April.