This past month, Our Data Bodies co-hosted a Technology, Discrimination, and Exclusion workshop with Cape Town-based civil society organization, Open Secrets. The workshop focused on knowledge generation around specific issues of data collection, collusion between private and government sectors, and ideas of ethical data usage in South Africa. The workshop took place at Community House in Salt River, Cape Town, which is a venue that holds space for several activist groups as well as the offices of Open Secrets.

This past month, Our Data Bodies was excited and grateful to have co-hosted a Technology, Discrimination, and Exclusion workshop with Cape Town-based civil society organization, Open Secrets.

The work Open Secrets does is deeply valuable and impressive. Much of their work, which can be found here, focuses on thorough research and investigation of financial crimes that undermine democracy and has legacies of colonialism and apartheid. Open Secrets work not only exposes the truth, but calls its readers and community members into the work of creating shared visions of justice and accountability justice looks like. 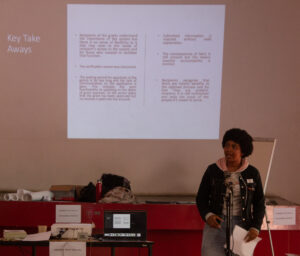 Importantly, Open Secrets’ work remixes research to make it digestible and accessible to everyone.  Much of their research is rigorous and requires many months of close attention paid to legal and financial documents as well as government hearings. Observing and reporting on systems that are intentionally convoluted as well as exclusionary requires immense amounts of time, however, the repercussions and outcomes from these systems have a widespread effect on our everyday lives. As such, OS dedicates parts of its research to not only translating the meanings of government, private systems and hearings but puts them into the context of how and why it is important.

Our combined interests and care for human rights in a human rights-denying world made for a knowledge-sharing workshop that was rich in exchange and in finding the overlaps in our differing contexts (US and SA) and our shared resistance strategies. Additionally, planning support and conceptualization was aided by Thami Nkosi at Right2Know, who ODB had the pleasure of working with again, following our interview for the Oral Histories Project.

First Half of the Technology, Discrimination, and Exclusion workshop

The workshop was held at Community House in Salt River, Cape Town, which is a venue that holds space for several activist groups as well as the offices of Open Secrets.

We began our workshop at 10:30 with an intimate and engaged group of community members and folks in civil society and data research. The first half of the day was organized by three presentations from Open Secrets, Our Data Bodies, and Thato Ditsele, a University of Cape Town information systems researcher. These presentations warmed up the room to specific areas of data injustice and allowed all of us to begin to see the linkages between each presenter’s work.

Open Secrets was represented by Abby May and she gave a detailed report on Open Secrets’ project, Digital Profiteers. Digital Profiteers is a designation Open Secrets has given to systems and institutions that are profiting from the digitization of services. In this case, May spoke about the profiteering occurring within The South African Social Security Agency (SASSA) which is responsible for the distribution of social grants. May highlighted the concerning collusion between government and private corporations in the distribution of services, as these partnerships can include:

This presentation sparked quite a long conversation about the precarity of these systems, the increasing propensity to privatize government systems in South Africa.

Second up was ODB, which was presented by members Blu Lewis and Kim M Reynolds. The two gave an overview of the major ODB projects over the years including The Digital Defense Playbook, The Oral Histories Project, and the forthcoming Amazon workplace surveillance project. They highlighted the ethos that underpins our work which is, power not paranoia. The two made connections between tech surveillance in the US and its normalization in marketing (i.e. Ring cameras) and the proliferation of private security in SA as a means to access safety (i.e. G4S as well as numerous local companies). Overarching, ODB talked about the immense importance of on-the-ground work, of talking with the community and seeing work as possible through storytelling as research. 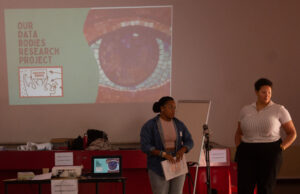 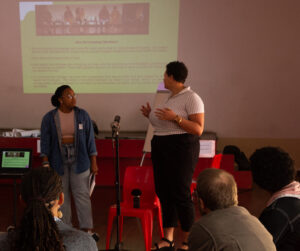 Lastly, Thato Ditsele gave a presentation about the host of problems that come with government campaigns that pose that security equals safety. Thato identified an upcoming campaign that is hoping to launch surveillance drones over Black neighborhoods during the upcoming festive season under the guise of a #SaferFestiveSeason. Thato identified that there are numerous concerns with projects like this in the effort to combat crime including

Thato gave his presentation in the form of writing a letter, addressed to his future family, explaining how all privacy has been eroded and that communities and lives have been destroyed in the name of policing.

Thato ended with a striking quote 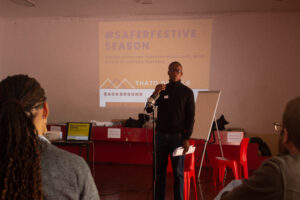 The second half of the Technology, Discrimination, and Exclusion workshop

The workshop then broke for lunch and reconvened for the second half of the day, which was small group activities that pulled together the contexts of what had been discussed in the presentations.

The first activity comes from the ODB Digital Defense PlayBook entitled Flip the Script. This activity was led by Blu and it began with two story prompts from Open Secrets and Our Data Bodies. These prompts were reflections from partners and community members about their feelings and insights on data collection.

From here Blu asked each pairing of participants to reflect back on themes identified in the prompts, and then after a short plenary, went into asking each pairing what solutions to the problem identified look like. 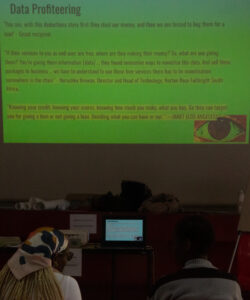 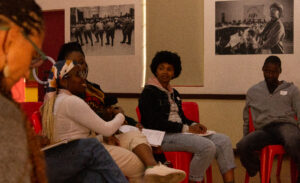 Out of this came thoughts and ideas around data ethics and Ubuntu Ethics for Civic & Public Technology. Ubuntu is a philosophical term deriving from Nguni languages like isiXhosa and isiZulu that roughly translates as “I am because we are”. While ubuntu can be somewhat romanticized outside of the South African and Southern African context, it served as a grounding principle for thinking about what ethical data look like, concretely, in our contexts. To read more, please find these reflections here.

The final workshop activity of the day was entitled Systems in Our Lives, also taken from the ODB Playbook.

This exercise was led by Kim and she began by asking the group to go into pairs again to identify the systems each person used to get to the workshop today, which included WhatsApp, uber, traffic, and CCTV surveillance on the roads and in public transport, to name a few.

The groups were then asked to think about all the systems they have used in one week’s time and to start to make connections between the systems. This led to conversations about how contacts and contact lists are connected to things like uber, email, and Whatsapp. There were also conversations about banking and how sending money to someone’s phone requires a transaction of data. Kim closed the discussion by noting the connections and subsequently, discovering ways to protect or reduce data output when possible.

This workshop brought together several workers and researchers who are concerned about the ways data surveillance and policing continue to coalesce. The workshop also brought together a new working partnership between Our Data Bodies and Open Secrets, with interest in pursuing a project analyzing the economy and social culture of private security in South Africa, so keep your eye on this space and Open Secrets for upcoming projects and more workshops to come!